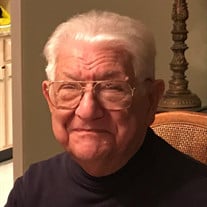 Andrew Dominici passed away on June 20, 2022, at the age of 95. Andrew, better known as Andy, was born to Jennie and Dominick, immigrants from Sicily, and had two older sisters, Josephine and Frances. They grew up on Clifton Avenue in Newark, across the street from the Sacred Heart Cathedral. As a young boy Andy loved watching the inside of the cathedral being completed. He attended Franklin Elementary School and then Central High School in Newark. Although Andy was interested in becoming an engineer, he chose to help his parents run their family business. He worked seven days a week with his parents, his sister, Jo and brother-in-law, Sal at D&D Macaroni on 7th Ave in Newark. When the store closed after the Newark riots, Andy then worked for the next 20 years rebuilding addressing and mailing machines. Andy met his future wife Catherine, (Kay) at a dance in 1952, and they were married one year later. They had five daughters that they raised in the North Ward of Newark. Andy remained very close to his family as well as Kay’s family. They all helped each other out, celebrated holidays together and gathered for dinner on Sundays. Andy and Kay moved to Edison in 1984 and then to Seabrook Village in Tinton Falls in 2002. They had many friends and participated in a variety of activities such as ballroom and line dancing, exercise classes, bible study, and always found time to volunteer. Andy also had two hobbies that he enjoyed, playing the organ and being a ham radio operator. Andy loved to “kibitz” with everyone he encountered. When people asked how he was, he always said “terrible”. His theory was that if he said “ok”, that would be it. Saying “terrible” got a laugh and more conversation. He also loved to say that his wife’s name is Kay and his name is Andy and together they were Kandy! They were happiest when they were together, dancing and holding hands. Kay passed away in March last year, and Andy had been longing to be reunited with her. Andy is survived by his 5 daughters--Madelyn (Ward), Jeanne (Tommy), Andrea (Roger), Karen (Augie), Lisa (Robert), 11 grandchildren and 5 great granddaughters (plus another one on the way). He was loved by all and will be greatly missed.

Andrew Dominici passed away on June 20, 2022, at the age of 95. Andrew, better known as Andy, was born to Jennie and Dominick, immigrants from Sicily, and had two older sisters, Josephine and Frances. They grew up on Clifton Avenue in Newark,... View Obituary & Service Information

The family of Andrew J Dominici created this Life Tributes page to make it easy to share your memories.

Send flowers to the Dominici family.