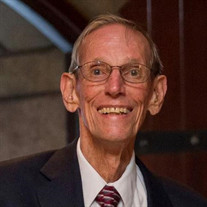 Benjamin Volk, resident of the Seabrook community in Tinton Falls, New Jersey, passed away on January 15, 2020, just shy of his 95th birthday. A final illness was mercifully brief. Ben was a beloved uncle, great uncle, and dear friend. Ben was born on February 3, 1925, in North Tonawanda, New York, second son of Angela and Joseph Volk, who emigrated separately from Slovenia in the early 20th century. Ben served in World War II, in the European “theater,” after almost being shipped to Burma. Returning from the war and given the opportunity of the GI Bill, he attended and graduated from two universities, first in 1948 from the University of Buffalo in accounting, and second in 1950 from Stanford University with a Masters in Business Administration. After Stanford, Ben chose to reside and work in sunny California in the region now known as Silicon Valley, which was mostly orchards in the 1950s. He was employed in several engineering firms and enjoyed the connections between finance and engineering. He also was a stockbroker for a short time. His longest employment was at Lockheed as a savvy, all-purpose troubleshooter and negotiator, specifically a Systems Test Engineer Specialist, who would be shunted to various jobs as needed. A pressing deadline of two months? Send in Ben! He used to say that he did not want to move high up in the company because he did not want people working under him. In return, he did not want to be bossed around. It was an unusual niche he filled as an independent within a giant company. Before and immediately after retirement, he owned and managed a cherry orchard and was also involved in the expansion of the California pistachio business. His father Joseph, who had moved to California with wife Angela following Joseph’s own retirement, built, with Ben’s help, a water-free pistachio-hulling machine. This was done on Ben’s land near Gilroy, which Ben eventually subdivided and built a house for himself. When Joseph passed away, Ben sold the Gilroy property and moved into a senior subdivision called The Villages in San Jose. Those of us who were treated to his hospitality there knew how happy he was in that wonderful place that conveniently had elegant dining. By a fortunate turn of fate, down the street from Ben lived the retired widow Patricia Bowers, bon vivant, painter, and former travel agent. Pat became the unconditional love of Ben’s life at the age of 75 (he had never married). For a couple decades, Ben and Pat enjoyed their San Jose homes, friends (which included friends in the LA area) and Pat’s large family all nearby. But many of us will mostly recall Ben’s excitement at their many travels around the world, from Australia, New Zealand, Fiji (where he almost died snorkeling), to Hawaii, Alaska, and nearly all the countries of Europe, including multiple trips to Slovenia where he found the entire family tree on his father’s side. As Ben and Pat aged, they loved to cruise, meeting people from all walks of life and tearing up the dance floor, both on and off ship. In 2016, after Pat passed away, Ben moved to New Jersey after Pat passed away to be closer to his nine nieces and nephews of his predeceased elder brother Joseph, and to brother Joe’s wife Vivian, who was and is still residing at Seabrook community. The nieces and nephews embraced his move as his nearest immediate family. They are: Tyler and partner Amelia Amon; Lauren; Thomas and daughters Eliza and Dana with husband Ben Rocco and son Noah; Kristin and husband Bernie Funk and sons Joe and Bern and husband Rachid Bejjani; Kenneth and wife Michelle and daughters Katherine and Lauren; Nancy and sons Michael and Kevin; Janice and husband Michael Simpson; James and wife Cindy and daughters Angela and husband Brenton Franciso and Vicky and husband Ryan Smith and children Joseph, Vivian, and Ben; Sandy and husband Steve Silky and their children Jack, Colleen and husband Benny Limegrover, and Erin and husband Eric Plikuhn and sons Von and Declan. In addition, Ben always held close to his heart the large California-based family of Patricia Bowers, as well as his west coast friends from fishing, pistachio farming, and touring. All who knew Ben loved him. He was remarkable for his openness to people, unconditional acceptance, and timeless stories. He was enthusiastic, for example at the large Thanksgivings at Jan’s or Volkfests at Tom’s, to make the rounds of engaging and amusing everyone in one on one meaningful conversation. He liked to talk about his life and incidents through which he gained a bit of wisdom or had a personal victory or riotous bit of revelry. Ben also was superb at listening to others, hearing their stories and struggles and offering advice when needed, just enough and without pressure. Thus he seemed ageless and, up until a few weeks ago, he seemed as vital and vibrant as ever. Indeed, in his 90s he self-published two books, available online. All who knew Ben will miss him dearly. A private memorial will be held in the near future.

The family of Benjamin Volk created this Life Tributes page to make it easy to share your memories.

Benjamin Volk, resident of the Seabrook community in Tinton Falls,...

Send flowers to the Volk family.