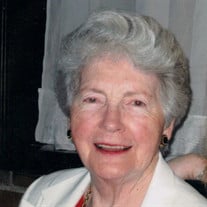 Tinton Falls, NJ - Bernadette Grogan, 88, died peacefully Friday morning, Aug. 15 at home where her children and grandchildren had kept a nearly two-week, round-the-clock vigil . Bernadette was born Sept. 28, 1925, the third of six children born to Agnes and John Moran in Carrick-on-Shannon in County Roscommon, Ireland. She would regale her children with tales of attending the regatta on the Shannon River; attending a one-room schoolhouse and working the family farm. When an older sister declined an American aunt’s offer to bring her to “the states,” Bernadette seized the opportunity. She landed in New York City in November 1951. Attending night classes, she obtained her general equivalency diploma. She met Patrick Grogan while attending a Gaelic football game in the Bronx. They married on Sept. 6, 1953, raising four children during a 46-year marriage that ended in his death on April 13, 2000. They built their family in Bay Ridge, Brooklyn. Devout Catholics, the couple regularly attended daily Mass. Bernadette became an accomplished amateur painter, capturing scenes from throughout her life. Her paintings include the Verrazano Bridge, Irish farm life and religious figures. The paintings now proudly hang in the homes of her children. Bernadette celebrated her 80th birthday by throwing a party at a hotel in Carrick-on-Shannon, attended by her American family, Irish siblings and their families and her childhood friends. She treated her four children, their spouses and seven grandchildren to the trip that included a stay in Ennis, Ireland where her husband was born. Since May 10, 2003, Bernadette resided at Seabrook Village where she “went to everything.” She enjoyed the movies and performances in the auditorium, made trips to plays and beaches and other outings and participated in various workshops. She is survived by her children, Maureen Stout (Buddy Anckner), Kathy (Bill Winn), Michael (Patti) and Patrick (Karen); and seven grandchildren, Christopher (Rachael) and Jaclyn Stout; Kristy and Nikki Winn; Matt and Sean Grogan and Caitlin Grogan. She is survived by one sister, Kathleen McDermott and a brother, Vincy Moran, both of Roscommon, Ireland. Called to Heaven before Bernadette were her sisters, Chrissy, Joey and Ethna as well as son-in-law, John Stout. Calling hours are from 2 to 4 p.m. and 7 to 9 p.m. Sunday at Bongarzone Funeral Home (www.bongarzonefuneralhome.com) in Tinton Falls NJ on Sunday, Aug 24. A funeral Mass will be held at 11 a.m., Monday, Aug 25 at Seabrook Village, 3000 Essex Road, Tinton Falls, N.J. A private burial will be held at a later date.

The family of Bernadette Grogan created this Life Tributes page to make it easy to share your memories.

Send flowers to the Grogan family.