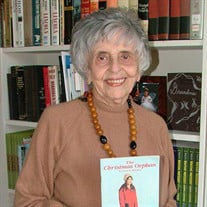 Carol H. Behrman, 91, passed away on the morning of December 29, 2016 after a short illness at Seabrook Village, Tinton Falls, NJ. She was the author of twenty-seven books, fiction and non-fiction, for children and young adults, as well as seven writing texts used in schools throughout the U.S. and Canada. She was born and raised in Brooklyn, NY and lived for many years in Sarasota, Florida and northern New Jersey, where she and her husband of 67 years, Edward, raised three children. She graduated from The City College of New York and Teacher’s College, Columbia University. Carol was a long-time teacher as well as an author. She taught first in New York City and then, for fifteen years, at the Middle School in Glen Ridge New Jersey. She also lectured and taught at New York University, Seton Hall University, Chautauqua Institute, and at many writers’ conferences including New Jersey Writer's Conference, Cape Cod Writer's Conference, and the Sarasota Reading Festival. Carol was “born” to be a writer. As a young girl, her dresser drawers were stuffed with scraps of paper containing poems and stories. She always kept a notebook on hand to scribble her thoughts whenever the irresistible urge struck. As a young mother, she wrote stories to entertain her three children. Carol began her writing career writing hundreds of short stories and articles in national periodicals. Her first book, "Catch a Dancing Star," was published in 1975 and since then, she produced on the average of one book a year. In 2016, Behrman, still seeking new horizons, published her first book of poetry. "More Than Love" explores the possibility of true love and Behrman's own experience finding her soul mate in this imperfect world, interspersed with poems on nature and spirituality. Carol is survived by her beloved husband Edward of Tinton Falls, NJ, her daughter and son-in-law Bonnie Behrman and Bernard Maisner of Bay Head, NJ, her son and daughter-in-law Drs. Joseph & Jeni Behrman of Pittsford, NY, her daughter Linda Beezer of Newburgh, NY, and her beloved grandchildren Patrick and Luke Beezer, Matthew and Jonathan Behrman and Rose Maisner. A memorial service will be held at a later date.

Carol H. Behrman, 91, passed away on the morning of December 29, 2016 after a short illness at Seabrook Village, Tinton Falls, NJ. She was the author of twenty-seven books, fiction and non-fiction, for children and young adults, as well as... View Obituary & Service Information

The family of Carol H. Behrman created this Life Tributes page to make it easy to share your memories.

Carol H. Behrman, 91, passed away on the morning of December...

Send flowers to the Behrman family.