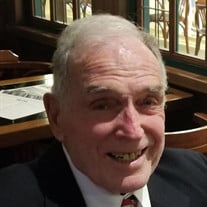 Charles Francis Fitzsimmons Jr, "Charlie", passed peacefully in his sleep into the waiting arms of his creator on March 20th, 2020. He is survived by his loving wife of 63 years, Carole Lee Fitzsimmons (nee Gennette), his five children, daughter Linda Belcher (son-in-law Steve), son Charles F. Fitzsimmons III (daughter-in-law Linda), son Michael Fitzsimmons (daughter-in-law Anne), daughter Marianne Fitzsimmons (son-in-law Robert Stoute), and daughter Carole Ann Palmer (son-in-law Steve). He is also survived by his 9 grandchildren, David, Charles IV "CJ", Lauren, Patrick, Megan, Morgan, Katie, Elizabeth, Roderick, and 20 nieces and nephews as well as his two childhood best friends of over 80 years, Donnie Costello and Chuck Felix. He was predeceased in his death by his parents Charles Sr. and Helen Fitzsimmons (nee Nader) his brother James Fitzsimmons, sister Helen "Sis" Ryan, brother William "Billy" Fitzsimmons. Born in Bridgeport, Connecticut on May 29, 1929, Charlie, "Bud", "Pop" lived in Stratford, Connecticut and was a graduate of Stratford HS. He graduated at 19 and enrolled at Dartmouth College where he was a proud graduate of the class of 1952. He was a huge believer in higher education and insisted (and saw) all five of his children graduate from college. After his own graduation, Charlie was drafted into the US Marine Corps where he proudly served this country in the Korean war from 1952 to 1954. He started his professional career in 1954 working for the Bridgeport Brass Company where he met his future wife Carole. This started an over 30-year career in primary metal and metal manufacturing industries including brass, copper, copper wire and eventually high strength steel wire rope. Charlie moved his family to Mahwah, New Jersey in 1971 where his children were raised and attended the local high school. Charlie was a prolific vacationer, and no place grabbed his heart greater than the beach, specifically the beaches of Long Beach Island, NJ, where he took his family for vacation yearly the last 2 weeks of August. He eventually purchased his own home there which then became the focal point of his life. He regularly entertained his friends, neighbors and family, especially his children and grandchildren, who he instilled the love of the beach, and created a lifetime of memories. He will mostly be remembered for his love of his favorite cocktail "a Manhattan" which he enjoyed on an almost daily basis for over 50 years as well as his insistence on a daily "hug" from family and friends whenever in his presence. But mostly lying on the beach in the sun or spending time in the ocean which he absolutely adored and continued to do well into his 90th year. His interests included carpentry, wood working, staying healthy, his rowing machine, walking, running and eventually bike riding and in his later years golf. Although not taking up golf until into his late sixties he achieved 2 major highlights - the first being a hole in one, at the age of 72, and the other a member-guest championship, age 80, with his son-in-law, Robert Stoute (his guy). Charlie was a devout Roman Catholic and rarely missed mass on Sundays except for extreme circumstances. He will be greatly missed by his adoring family who are devotedly thankful for a lifetime of cherished memories, endless love and unwavering support. Charlie's memorial mass will be offered at 12 noon on October 31, 2020 at St. Francis of Assisi Church, 4700 Long Beach Boulevard, Long Beach Township, NJ 08008.

Charles Francis Fitzsimmons Jr, "Charlie", passed peacefully in his sleep into the waiting arms of his creator on March 20th, 2020. He is survived by his loving wife of 63 years, Carole Lee Fitzsimmons (nee Gennette), his five children, daughter... View Obituary & Service Information

The family of Charles Francis Fitzsimmons Jr. created this Life Tributes page to make it easy to share your memories.

Send flowers to the Fitzsimmons family.