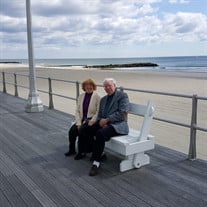 David R. King, 96, of Wanamassa, passed away peacefully on January 29, at home, after a long and valiant battle with Alzheimer’s, surrounded by his family. He was the beloved husband of Patricia (Patty) A. King, his patient care giver and best friend, sharing 66 years of marriage. Born on January 11, 1924, in Newark, NJ, David was the son of David Dewey King and Ruth Jacobson. David lived in northern New Jersey until he moved to the shore with his family as a teenager. He entered the army while living in Wanamassa, serving in the Aleutian Islands and in Germany. During David’s career, he worked for Western Electric, Bendix Corporation, and Fort Monmouth as a test and calibration lab supervisor, retiring from Fort Monmouth in 1983. Dave was very active in Square Dancing. He loved the Big Band music. David was an original member of the Church of St. Anselm, where he served in many capacities, including an enthusiastic greeter for many years. Other duties included planting and maintaining gardens and trees and making special objects for the church. He and Patty were long time volunteers at The Center in Asbury Park. They were honored with the “Outstanding Volunteer Award” for their work there on October 1, 2015. David was a true Renaissance man. He was a master carpenter, designing and building many of the cabinets and furniture in his house of 65 years. He was an electrician, painter, builder, and general fixer of anything. From clocks to stained glass to oil paintings to square dance dresses for Patty, he could make anything he put his mind to. He enjoyed travel and adventure. Starting out with family camping trips, they progressed to square dancing holidays, Big Band events, cruises, and tours through Alaska, Hawaii, Canada, Europe, United Kingdom, Mexico, Latin America, Scandinavia, Finland, and Iceland. He and Patty traveled all over the lower 48, often toting multiple cameras around his neck to photograph it all. In addition to his wife, Mr. King is survived by his daughters Pam Nobles and Kathy Murphy, his son-in-law Robert Spear, and his grandchildren Eliza, David, and Andrew. He is predeceased by his son Kenneth David King and his brother Robert M. King. Friends and family may visit Church of Saint Anselm, Tinton Falls, NJ, between 10:00am and 12:00 noon on January 31, 2020. A mass will follow at noon A memorial service and interment will be scheduled with the family at the Brigadier General William C. Doyle Memorial Cemetery, New Jersey, in the future. In lieu of flowers, consider making a memorial contribution in David’s name to The Center, 806 Third Avenue, Asbury Park, NJ 07712. The Center in Asbury Park, Inc., is a volunteer based New Jersey not-for-profit service organization, providing support services for people living with HIV/AIDS and their caregivers, since 1992. thecenterinap.org Flowers sent to the Church of Saint Anselm for the visitation must be contained in a basket. Church of Saint Anselm, 1028 Wayside Road, Tinton Falls, NJ 07712 Condolences and Memories may be shared on his memorial page at www.bongarzonefuneralhome.com

David R. King, 96, of Wanamassa, passed away peacefully on January 29, at home, after a long and valiant battle with Alzheimer&#8217;s, surrounded by his family. He was the beloved husband of Patricia (Patty) A. King, his patient care giver... View Obituary & Service Information

The family of David R. King created this Life Tributes page to make it easy to share your memories.

David R. King, 96, of Wanamassa, passed away peacefully on January...

Send flowers to the King family.