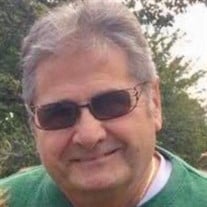 Dominick “DomDi” Pasqua DiBisceglie of Ocean Township, NJ (formerly of Union City, Ridgefield and Palisades Park, NJ) passed away peacefully on Thursday, January 28th. Dominick is predeceased by his parents Dominick Pasqua DiBisceglie and Phyllis Rippicandidi DiBisceglie, brother Vincent DiBisceglie, and his beloved wife Janet LeCause DiBisceglie . He leaves behind his sister Lu DiBisceglie Cartwright and her husband Don, son Bruce and his wife Kathy Duffy DiBisceglie, son Gregory DiBisceglie and his husband Luca Stefani, daughter Janine Nolan and her husband Anthony DiCosimo, son James Patterson, and his adoring grandchildren, Liz DiBisceglie, Tim DiBisceglie, Ryan Nolan, and Dean Patterson, as well as many dear nieces, nephews and cherished friends he met along the way. Dominick was born in Jersey City. He had a knack for design and, after graduating from Union Hill High School where he met his high school sweetheart and first wife Anne Boesch, he went on to study at the Fashion Institute of Technology. He became a designer at Carolace Embroidery where he worked for over thirty years, then took up painting and furniture restoration in his retirement. He was an avid tennis player, cub scout master and youth sports coach. He was a proud member of the Italian American Association of the Township of Ocean. He enjoyed caring for and racing horses, spending time by the ocean, bocce tournaments with his beloved friends at Rolling Meadows, tailgating at New York Jets games, and fishing on his boat, but of all his passions and accomplishments, the greatest in his eyes was his family. Dominick’s family is comforted in this time of mourning by the memories of the radiant love that he and Janet emanated. They remember Christmas Eve as the best day of the year simply because being with the two of them made it so special with their traditional dinner and Christmas carols. They remember summer vacations in Wildwood Crest and waking up before the sun to watch it rise over the ocean with Grandpa (and even better, to watch his never-fading awe at the sight). They remember how next to him at the dinner table was the best spot to be because they were lucky enough to hear his jokes. They remember him playing football with them and their friends. They remember him always on the sidelines of soccer games, basketball games, dance recitals, plays. Dominick always showed up for the people he loved. He was - above all else - a family man to his core and his love remains strong in the hearts of his family and friends. Visitation will be held on Sunday, January 31st at Bongarzone Funeral Home in Tinton Falls, NJ. Relatives and friends are invited to join in remembering his wonderful life from 11:00 AM until 1:00 PM. Because Dominick lost his wife to multiple myeloma in October 2020 just months before his passing, contributions can be made to the Multiple Myeloma Research Foundation in his and sweet Janet’s memory in lieu of flowers. **Due to limited capacity, we ask that you keep your visit brief so that all guests will be able to offer their condolences. Masks must be worn on the nose and mouth inside the funeral home at all times. Thank you for your kindness during this difficult time.**

The family of Dominick Pasqua DiBisceglie Jr. created this Life Tributes page to make it easy to share your memories.

Send flowers to the DiBisceglie family.