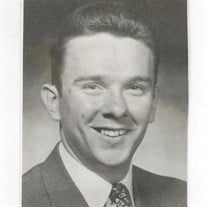 Donald E. Czekanski, 96 of Tinton Falls, NJ passed away peacefully on April 22, 2022. Donald (Don) was a WWII Veteran and served in the Air Force in the Pacific Theater as a Tail Gunner on B-29’s from 1944-45, returning to the states in 1946. A Financial Executive, Don earned bachelors and master’s degrees from Penn State University and New York University, respectively, which led to various financial and managerial roles all with AT&T/Bell Laboratories. In retirement, Don served on the Manchester Township Planning Commission for over twenty years including eight as Chairman. He also was involved in numerous Veteran’s projects, served on the Veteran’s Committee for over ten years and was one of the leaders who conceptualized, fund-raised, and built the thirty-acre World War II Veterans Memorial Park that opened in Whiting in 2010. Don led an active life as he enjoyed his family, volunteering, landscaping and gardening, traveling, running, golf, local politics, and rooting for Penn State football and the Pittsburgh Steelers and Pirates. Born and raised in Mount Pleasant, PA, Don settled in Morristown, NJ where he raised his family. Following retirement, he moved to Leisure Knoll in Manchester Township, NJ spending twenty-seven years before moving to Seabrook Village in 2014. Don is survived by Jean, his beloved wife of 67 years. Surviving are his son Richard Czekanski and his wife Jeannine, of Naperville, Illinois; his daughter Carol Iannucci and her husband Raymond, of Morris Plains, NJ; and his son John Czekanski and his wife Karen Lowry, of Lantana, FL; five grandchildren, Michael, Stephen, Laura, Jack, and Emma Czekanski; and three great-grandchildren, Easton, Aiden and Claire Czekanski. A memorial Mass will be held on Saturday, June 11, 2022, at 10:30am at Seabrook Village, 3000 Essex Road, Tinton Falls NJ followed by a reception. Interment will be private at Brigadier General William C. Doyle Memorial Cemetery. In lieu of flowers, donations can be made to the American Cancer Society.

The family of Donald E. Czekanski created this Life Tributes page to make it easy to share your memories.

Send flowers to the Czekanski family.