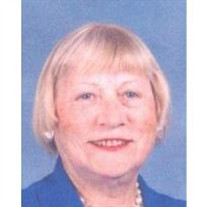 Elizabeth Borden Griffiths, 91, of Little Silver died in her sleep on Wednesday June 16, 2010. Betty was fiercely independent and always looking to the future; she lived alone, cooked, worked, drove, and paid all her bills. Betty had a remarkable life from the very start; she was 3 pounds at birth. Her parents Fannie Davison and Orville Carroll Borden married and lived on Monmouth Street in Red Bank. From her bedroom window, she watched the construction of the Count Basie (Carlton) Theater. As a child she and a cousin would camp in the theater to avail themselves of the air conditioning. Betty attended the River Street School, graduated Red Bank High School in 1936; graduated Red Bank Business Institute in 1938, and worked for eight years as a legal secretary: first for Allaire (Shake) Cornwell, Esq. and then for Howard Higinson, Esq. She was married on January 10, 1942, to Ernie Griffiths. After he returned from his service with the 69th Infantry Division, they moved to Little Silver in December of 1946. Ernie built the second pool ever constructed in Little Silver in 1955 adjacent to a natural spring; it was the site of numerous neighborhood gatherings. The United Methodist Church (UMC) has been a significant part of her life and especially Embury UMC. Betty took her daughter Carol to Sunday school at Red Bank UMC and taught a Sunday school class there. By 1950 they were attending Embury UMC in Little Silver. She became a member on Feb 26 of that year and asked what she could do – she taught the first grade class ever since. Betty was also the children’s choir director and pianist for the Sunday school from 1982 until 1989. She has also been the Sunday School Superintendent since early in the 1990s. Betty was further involved with the annual fall series of pie bakes at Embury UMC since its inception in 1964 as well as the Annual Rummage Sale since 1984; for many years, she planned and ran both events. Betty also did regular presentations: on life as a child complete with her dolls and toys, Veterans Day, Armed Forces Day, and Memorial Day complete with her husbands’ Army uniforms. Little Silver Point Road School employed Betty as a lunchroom aid and playground supervisor since soon after her husband Alfred Ernest Died in January 1978. She introduced jump rope during lunch and ran a year-long competition complete with prizes for 32 years – in fact she returned to work the day before she passed for the awards ceremony to announce this year’s winners. Betty is survived by her two children, David Ernest Griffiths of Little Silver and Carol Jean Mawby of Aberdeen, 6 grandchildren, and 5 great-grand children.

Elizabeth Borden Griffiths, 91, of Little Silver died in her sleep on Wednesday June 16, 2010. Betty was fiercely independent and always looking to the future; she lived alone, cooked, worked, drove, and paid all her bills. Betty had a remarkable... View Obituary & Service Information

The family of Elizabeth Borden Griffiths created this Life Tributes page to make it easy to share your memories.

Elizabeth Borden Griffiths, 91, of Little Silver died in her...

Send flowers to the Griffiths family.