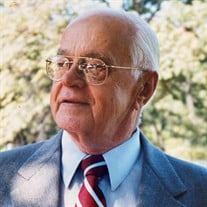 Henry L. Jaszewski passed away peacefully at his home on September 16th, surrounded by family and loved ones, just days after his 95th birthday. Henry was born in Jersey City on September 10th, 1925 to Emily (Sajkowski) and Matthew Jaszewski. He was the youngest of five children, served in the US Army during World War II, and was the only member of his family to attend college. Henry paid his own way through New York University, earning his degree in Accounting. To cover his tuition, he accepted a part-time bookkeeping role at Halsted Corporation in Jersey City, a textile bag manufacturing company where Henry would ultimately work his way to the top, assuming sole ownership of the business some 30 years later. Henry was fortunate that his professional path led him to Western Electric for a brief period, where he met the love of his life, Lucille Vivo, and they married on June 18, 1949. Henry and Lucille celebrated fifty years of marriage and two wonderful children before her passing in 2000. In business, Henry was the rare blend of ambitious yet principled. He quickly grew Halsted from a small regional manufacturing plant to a national player in the packaging industry. He had a unique and refreshing ability to build lifelong friendships with even his fiercest competitors; and he took great pride in always striving to do the right thing for both his clients and his employees. Despite his health challenges over the last few years, Henry always relished hearing about the expansion of the business he so loved. Henry was a proud and active supporter of his community. A longtime member of the Jersey City Rotary Club, he was awarded the Paul Harris Fellowship in 2015 for his 40 years of service and contributions. He could be found every year at his former Jersey City elementary school where he would present each student with a new dictionary, and then enthusiastically quiz them on the various definitions of his favorite words. Henry’s family and friends will miss his many talents, particularly his accordion playing around the fireplace at Christmas. Though Henry downplayed his musical abilities, he grew up spending many weekend evenings with his polka band at some of the marquee function halls in the greater New York area. While Henry was engaged in so many things, it was his family that was his unrivaled pride and joy. No friend, acquaintance or passerby could escape Henry without learning about the latest accomplishments of his children, grandchildren, or great-grandchildren. Henry will be deeply missed by his daughter, Karen (Michael) Murphy; daughter-in-law Cathie Jaszewski; grandchildren Eric (Jenna) Jaszewski, Christie (Kyle) McKinney, Stacey (Kris) La Turno, Ryan (Ashley) Murphy, Justin (Meg) Murphy, Kyle (Alyssa) Murphy, Brendan Murphy; his ever growing circle of great-grandchildren, and several nieces and nephews whom he cherished greatly. He was preceded in death by his wife, Lucille, and his son Richard. Henry and his family are eternally grateful for his caretaker and companion, Nino Makashvili, for adding years to Henry’s life and for bringing a smile to his face each day. A small private celebration of Henry’s life will be held on Friday, September 18th, 2020. In lieu of flowers, donations may be made in his memory to the Jersey City Rotary Foundation, c/o Treasurer Aaron D. Forman, 76 Bloomfield Street, Apt.9H, Hoboken, NJ 07030. For online condolences, please visit Henry’s memorial page at www.bongarzonefuneralhome.com

Henry L. Jaszewski passed away peacefully at his home on September 16th, surrounded by family and loved ones, just days after his 95th birthday. Henry was born in Jersey City on September 10th, 1925 to Emily (Sajkowski) and Matthew Jaszewski.... View Obituary & Service Information

The family of Henry L. Jaszewski created this Life Tributes page to make it easy to share your memories.

Henry L. Jaszewski passed away peacefully at his home on September...

Send flowers to the Jaszewski family.