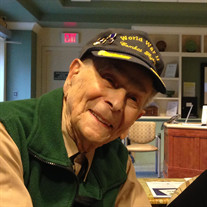 Herman (Hy) Frank of Seabrook Village, Tinton Falls, NJ, formerly of Woodside, NY (by way of Brooklyn), passed away peacefully on October 6, 2018 with his daughter Amy by his side. Herman lived a full and rewarding 98 1/2 years; he was determined to reach the extra half-year mark. Herman was born at home in Manhattan to Harry and Dora Frank. He is the youngest of three children and his remaining and much loved sister, Edith, celebrated her 100th birthday earlier this year. Herman was a highly decorated veteran and former POW in WWII, proudly serving in the Army Air Corps. He was awarded the Purple Heart, the Distinguished Flying Cross, the Good Conduct medal and others. After his honorable service, Herman worked as a commercial printer while raising his two wonderful children with his wife. He also formerly served as the President of the Big Apple Chapter of American Ex-Prisoners of War. Herman moved to Tinton Falls in 2007. He was selected to have his WWII experiences recorded as part of the WWII Veteran Oral History Project; the text and accompanying pictures can be found at: https://www.nj.gov/military/museum/summaries/wwii/Frank.html. In addition, the videos that Herman recorded of his experience in WWII are part of the collection of the Library of Congress Veterans History Project, which can be found at: http://memory.loc.gov/diglib/vhp/bib/loc.natlib.afc2001001.78713 Herman was a much beloved figure in the Seabrook community. He was a true character and his enthusiasm and engaging personality will be missed by all. He was active in the Seabrook Veterans Group and was equally known for his love of card playing; poker, canasta and bridge, to name a few, although he never quite mastered Texas Hold 'Em. He advised Amy on more than one occasion that she should not play poker, as she did not have a suitable "poker face"! (Amy understands and agrees.) He often played Rummikub and previously could handle a pool cue too. Herman was preceded in death by his beloved wife Dorothy, his son Gary and his sister Mildred. He is survived by his daughter Amy Murray and her husband Michael; his grandson Matthew and his wife Natali; his granddaughter Sally; his daughter in law Lynn; his sister Edie; his beloved niece and nephew Bunny and Fred, their spouses, children, and grandchildren; his very special friend Muriel; and the entire Seabrook family. A memorial service in the Atrium at Seabrook will be held at noon on Sunday October 14, 2018. All other services will be private. Instead of flowers, donations in condolence or remembrance of Herman may be made to: the Seabrook Jewish Community or the Seabrook Resident Care Fund, both located at 3000 Essex Road, Tinton Falls, NJ 07753 or The Lustgarten Foundation, 415 Crossways Park Drive, Suite D, Woodbury, NY 11797. Acknowledgements may be sent to Amy Murray at her office address of 163 West 125th Street, 17th Floor, New York, NY 10027.

Herman (Hy) Frank of Seabrook Village, Tinton Falls, NJ, formerly of Woodside, NY (by way of Brooklyn), passed away peacefully on October 6, 2018 with his daughter Amy by his side. Herman lived a full and rewarding 98 1/2 years; he was determined... View Obituary & Service Information

The family of Herman I. Frank created this Life Tributes page to make it easy to share your memories.

Send flowers to the Frank family.