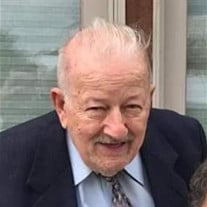 James H. Barschow, 82 years young, died peacefully, after a battle with a long-term illness. He passed on April 17th, 2020 at Monmouth Medical Center South’s Hospital. He was born August 9th, 1937 in Brooklyn New York, the son of James F. Barschow and Francis A. Barschow. Jim attended Andrew Jackson high school. It was his freshman year, that he met Phyllis Barschow, who would later become his wife and the love of his life. Little did he know, Phyllis knew she would marry him a month prior, when he served her ice scream, at a local parlor. He was her “soda jerk” and she was his “funny face”. They went steady at sixteen and were married by nineteen. He put off the remainder of his high school career in order to serve his country. Before graduating, he enlisted with the United States Navy. He served from 1955-1957, on the submarine USS Corsair. After being discharged he went on to work at Ingersoll & Rand, EdCo Pneumatic Tools, and Proshop at Sports-O-Rama. These were a few of his many business endeavors. James became a manager at New Shrewsbury Ice-Skating Rink. He coached his son’s hockey team also while supporting and conditioning his daughters in competitive figure skating. He was an instructor and their number one fan. In addition, to many years of hockey and skating, James also loved to golf. "Hit the ball Willy" was one of his many phrases. Anyone that knew Jim could tell you many wonderful attributes. Some would say he had a remarkable sense of humor, an infectious laugh, or an impressive amount of knowledge. However, more than anything Jim had an infinite amount of love to give, to anyone who wanted it. In addition to his parents, he was predeceased by Son, John Francis Barschow and Daughter Deborah Anne Barschow-Meadows. Surviving in addition to his wife, Phyllis Barschow, are his sister Elaine Biederman (her husband Leo deceased) and brother Ken Barschow; sons, James Joseph, and his wife Susan, William David, and his wife Susan; daughters, Kathleen Rose her boyfriend Charlie, Cynthia Lynn and her boyfriend Josias; grandchildren, Margaret, and her husband Seth, Billy, Johnny, Kevin, and his wife Sarah, Ashley, Jacki, Johnny Anthony, Cassidy, Courtney and her boyfriend Matt, Maddy, Chelsea, Joseph, and his wife Sharron; great grandchildren, Oliva, Logan, Zoe, Penelope, Giulianna, Michael, and Chanel. In lieu of flowers, the family asked that donations be made to the US Department of Veteran Affairs, because of how much they helped Jim in his time of need. Jim’s family would like to extend their sincere thanks and deep gratitude for all expressions of sympathy and acts of kindness shown during this time.

The family of James H. Barschow created this Life Tributes page to make it easy to share your memories.

Send flowers to the Barschow family.