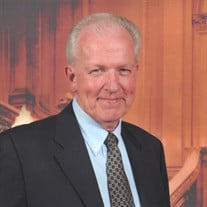 James “Jim” Joseph O’Brien, age 75, of Ocean Township, New Jersey passed away peacefully in his home, surrounded by his wife, daughter, and sister-in-law. He is predeceased by his mother and father, Joseph and Frances O’Brien; and 6 siblings. He is survived by his wife, Peggy; his daughter, Deborah; his son, Timothy; his grandson and granddaughter, Nicholas and Gretchen; his sisters, Rosemarie and Frances; his brother, Daniel; and many nieces, nephews, grandnieces, and grandnephews. The viewing will be held 4 to 8 PM on Sunday, January 7, 2018 at Bongarzone Funeral Home, 2400 Shafto Road, Tinton Falls, NJ 07712. Funeral mass will be offered at 10:30 AM on Monday, January 8, 2018 at Saint Jerome RC Church, 254 Wall Street, Long Branch, NJ 07764. Entombment will follow at Woodbine Cemetery and Mausoleum, Oceanport, NJ. Memorial donations may be made to Fulfill, the food bank of Monmouth and Ocean counties at https://donatenow.networkforgood.org/1437901 Jim was an extremely humble man and did not want to be recognized through an obituary. He truly felt his only noteworthy accomplishments were his two children. However, that being said, he obliged his loving wife by writing a short autobiographical account to share with the world: “As the eldest of Joseph and Frances’ 10 children, Jim was the first of either side of the family to earn a college degree, diligently doing so while working full time to be self-supporting. At the same time, he began his lifelong romance with his beloved, joined and led a local fraternity as president, and continually sought ways to increase his income. His passion for music helped him through this time, and he and some friends created a rock-n-roll single that attracted attention and led to an ASCAP membership. Although not creating fame or fortune, that single is included in a music collection of ‘oldies’ called Back to Brooklyn. Before marrying, Jim began his career in insurance. Most of the time since 1968, he worked in NYC, but lived in NJ. He married his love, and moved her around a number of times over the years through four states for his career; together, Jim and Peggy had five houses built, finishing with their last residence together in Ocean Township in 2004. Jim served in underwriting and product management roles for several large companies that service life, disability, accident, and health insurance. Additionally, he served as a broker, an agent, a consultant, and a human resources benefit manager. He co-founded the American Special Risks Association, authored a book regarding underwriting accident insurance for employer groups, and developed several unique forms of travel and health insurance throughout the years. His final position involved designing plans and setting premiums for disability, life, and health programs covering major groups of healthcare and legal professionals. Jim happily retired in 2008, but he was always willing to tell anyone, in detail, what it would take to fix the current healthcare crisis in the US. Insurance wasn’t everything in Jim’s life, though. Jim continued to love most forms of music, especially those involving the guitar. He loved to travel, especially international cruising. He was a committed do-it-yourselfer, fixing things or making things work better just like his father had. As a devoted Catholic, Jim was a dedicated parishioner of St. Jerome in West Long Branch when in NJ, and St. Elizabeth Seton in Sun City when in Arizona. In lieu of flowers, Jim has requested that donations be made to Fulfill, the foodbank of Monmouth and Ocean counties ( https://donatenow.networkforgood.org/1437901 ) Ultimately, his family would greatly appreciate honoring his abundant giving and caretaking constitution in this way.

James &#8220;Jim&#8221; Joseph O&#8217;Brien, age 75, of Ocean Township, New Jersey passed away peacefully in his home, surrounded by his wife, daughter, and sister-in-law. He is predeceased by his mother and father, Joseph and Frances O&#8217;Brien;... View Obituary & Service Information

The family of James "Jim" Joseph O'Brien created this Life Tributes page to make it easy to share your memories.

Send flowers to the O'Brien family.