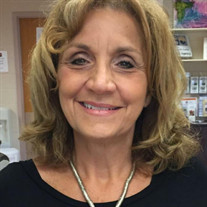 Janet LeCause DiBisceglie, born Janet Marie LeCause, passed away Wednesday October 7, 2020, leaving her body and travelling onto nature, god, and the hereafter. Janet’s final days were spent peacefully at her home in Ocean Township, surrounded by her immense family and visited by numerous friends who were each uniquely affected by her love. Janet DiBisceglie lived a seventy-four-year life of total dedication to her fellow person. She was born on July 30, 1946 into humble beginnings in a crowded working-class Italian home in Phillipsburg, New Jersey to Gertrude Gigliotti LeCause and Frank J LeCause. One of her earliest ambitions was to be a nun, but rather than join the convent Janet followed the path of blessedness in the world. Janet’s son James was born while she was a young woman working as a typist at a factory. When her first marriage ended, she opened her home to other young single mothers and created a communal house for women in a time and place where this was unheard of. Later, she married Dominic DiBisceglie, whom she would spend the rest of her life with. As she entered his life she unflinchingly cared for his three children as her own. Through the years of stewarding a full household, Janet created time to be a volunteer EMT in Palisades Park, a counselor for children with disabilities, an aide to survivors of domestic abuse, and innumerable other acts of charity recounted in the anecdotes of everyone who knew her. Further, to advance her abilities and sharpen her mind, she returned to school as an older woman and received a college degree. She would later spend much of her career working in the professional field as a Human Resources Coordinator at Unilever. When her career ended, rather than taking a well deserved retirement, she joined Ladacin-Schroth school as a teacher’s aide working with children with severe disabilities. Yet beyond her charity and professional career it was the family she built, and the children and grandchildren she taught and loved so profoundly that were most important to her. In her spare time, she enjoyed art, admiring sunflowers, cooking, and walking the boardwalk where she would always find a stranger to chat with and brighten their day. Janet was an unconditionally generous, vivacious, and kind person to everyone she encountered, without judgement or condescension towards a person’s standing or situation. Her life demonstrated the power of maternal care to bring people together as exhibited by the numerous people of all walks of life who came to see her in her final days. The gap in our souls left by her passing can only be balmed by following her example. Along with her son James Patterson and husband Dominick DiBisceglie, Janet is survived by her sister Joan LeCause, brothers Frank and Carl LeCause, and children Bruce, Janine, and Gregory DiBisceglie, Grandchildren Tim DiBisceglie, Liz DiBisceglie, Ryan Nolan and Dean Patterson. There will be a visitation for those that wish to share their stories of Janet, grieve, and celebrate her life this Sunday, October 11 at 10:00 A.M. to 2:00 P.M. In lieu of flowers, please continue her legacy by donating to the Multiple Myeloma Research Foundation, the Ladacin Network, or simply providing a random act of kindness to someone else. **Due to the continued public health concerns of Covid-19, please know that there is an occupancy limitation which may cause a wait time, please be respectful of your time visiting. Masks must be worn on the nose and mouth inside the funeral home at all times.**

The family of Janet M. DiBisceglie created this Life Tributes page to make it easy to share your memories.

Send flowers to the DiBisceglie family.