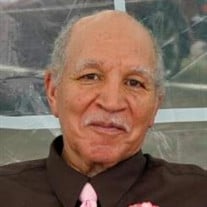 Jesse resided in Eatontown, NJ. He was predeceased by his parents William and Lauretha Harris, sisters Lagretta “Billy” Fisher, and Janet Harris; brothers William Harris Sr., Harvey Harris Sr., and Rufus Harris. He was born March 21, 1936 at home in Lawnside, New Jersey the second of nine children. Jesse is survived by his devoted wife of over 60 years, Marcelline Riley Harris, formerly of Fair Haven, NJ, and their five children: Christopher Harris of Lowell, MA, Jesse Harris Jr. of Burlington, NJ, Stacy Harris and wife Magda of Eatontown, NJ, Jacqueline Severinsen and husband Kenneth of Eatontown, NJ and Jason Harris and wife Jennifer of Sparta, TN. He also is survived by ten grandchildren whom he adored: Jordan Harris, Keonya Reed, Ariana Ryan, Jesse Harris III, Tyrone Harris, Kenny Severinsen, Kimarley Harris, Jesse Harris, Hazel Harris, and Janelle Harris. In addition, Jesse is survived by his brother John Harris of Lawnside, NJ, sisters Marion Carpenter of Clementon, NJ, Sadie Durham and husband David of Medford, NJ, Alice Wood of Sarasota, FL. He also has a host of in-laws, nieces, nephews, friends and family whom he loved to spend his time with. Jesse attended Magnolia Public Elementary schools and then graduated from Haddon Heights High School in Haddon Heights, NJ in 1954. He then obtained his Bachelor’s degree in Animal Sciences from Rutgers University in 1958 where he received the distinction of “Outstanding Student of the Year” his freshman and junior years. He continued his education by obtaining two Masters degrees from Rutgers. The first in 1960 in Animal Nutrition on a research assistantship and the second in Radiological Science in 1963 on full support by the United States Public Health Service. During this time he completed all of his coursework for his PhD and performed research for the USPHS. He topped off his education with a PhD, also from Rutgers, in Nutrition with a minor in Radiological Sciences in 1968. He completed his research, on the job, at the US Public Health Service Research Lab in Rockville, Maryland and worked for them from 1960 to 1970 as a Senior Scientist. After graduation, he decided to utilize his scientific knowledge in the education field. He received a professorship at the now, University of Massachusetts-Lowell in Lowell, MA in the Physics department from 1970 to 1994. Six of these years he spent as the Program Coordinator and the last four years as the Department Chairman. He retired in 1994 as Professor Emeritus of Radiological Sciences/Physics. After retiring from UMASS, he and Marcelline moved to Fair Haven, New Jersey where he continued teaching for Berkley College from 1998 to 2004. He also worked as an education consultant for the Borough of Fair Haven, NJ and a substitute teacher for Rumson-Fair Haven High School in Rumson, NJ. Jesse had more than a dozen scientific articles and papers published related to the biological effects of ionizing radiation. He had his first textbook published in 1994 entitled “Environmental Radiation and Health” with Kendall/Hunt Publishing Company. He continued to use his knowledge of this topic to assist and educate others. Over the years Jesse even served as an expert during the evaluation process of various projects including oil refineries, cellular towers, and more. Jesse was highly involved in community activities as well. He enjoyed participating in programs that focused on education, the environment, health, and youth athletics. This involvement extended from local to national venues. He served on boards for anti-poverty agencies, community action associations, and academic achievement programs. He was also involved with the community of Fair Haven with their recreation department. He was not just about school and academic achievement he also was a six-letter varsity athlete while at Rutgers (three in track and field and three in football). Anyone that knew Jesse was aware of his continued love for track & field. He coached Track and Cross Country from Massachusetts to New Jersey for over 50 years from the college level down to youth level. He also served as the Region 1 Athletics Director (Maine to NJ) for the AAU. He always managed youth track programs wherever he resided, encouraging children from all walks of life to be a part of a sport than anyone could excel at and enjoy. He had programs in Chelmsford, MA, Fair Haven, NJ and also served as an assistant coach at Rumson-Fair Haven High School in Rumson, NJ. In addition to athletics, Jesse was very devoted to Fisk Chapel AME Church in Fair Haven, NJ. He held the position of Superintendent of Church School, adult church school teacher and was a member of the Men’s choir. He was also a trustee of the church where he and Marcelline, a Missionary, have been members for many years. Fisk Chapel is the family church of his wife Marcelline since its beginning more than 150 years ago. Jesse and Marcelline continuously aided Fisk Chapel in service to God and the community through fellowship, fundraising, and more. Jesse was a truly dedicated servant of God, his family, friends, and his community. Jesse's viewing will be held 10 AM to 12 PM with his service at 12 PM on Saturday, January 11, 2020 at the Fisk Chapel AME Church, 38 Fisk Street, Fair Haven, NJ 07704. In lieu of flowers, the family is asking that donations be made in Jesse’s memory to: Fisk Chapel AME Church 38 Fisk Street Fair Haven, NJ 07704

The family of Jesse Young Harris Sr. created this Life Tributes page to make it easy to share your memories.

Jesse resided in Eatontown, NJ. He was predeceased by his parents...

Send flowers to the Harris family.