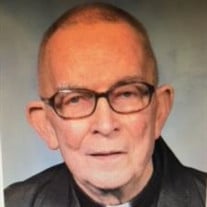 Rev. John J Gibbons III (Pastor Emeritus) died February 3, 2018 after a difficult year of declining health. Father John was the eldest child of John J Gibbons Jr and Agnes M. (Lyons). He is predeceased by his brother James, sister Judith and survived by his sister Mary G. McLoughlin. His ten nieces and nephews will miss his corny jokes, and his enjoyment in participating in many family occasions. Marie Metta and Kean J. Gibbons, niece and nephew, have been dedicated to Fr. John and provided him with every support they could to enhance his quality of life as he has required assistance. He is also survived by many great nieces and nephews. Fr. John has performed weddings and christenings for family and friends too numerous to count. Mahon cousins alone number in the hundreds. Fr. John maintained close friendships with families in each of his parish assignments and valued the generosity and kindness shown to him. Fr. John graduated from Good Counsel in Newark, Seton Hall Prep, attended Seton Hall University and Immaculate Conception Seminary. He was ordained on May 31, 1958 in Newark and said his first mass on 6/1/58 at St. Patrick Pro Cathedral in Newark, N.J. John was Parochial Vicar of Immaculate Heart of Mary Parish (merged) in Maplewood from June 19, 1958 till June 20, 1962. Divine Mercy Parish, Rahway from June 1962 till June 1963, then onto St. Andrew Parish (now#32), Bayonne from June 1963 till October 1970. From 1970 to June 1980, he was at St. Catherine of Siena Parish in Cedar Grove and from June 1980 to Sept 1982 he was at Queen of Peace Parish in North Arlington. Father John became Pastor of Our lady of the Most Holy Rosary/St. Michael in Elizabeth in September of 1982 until September of 1985 where he went as Parochial Vicar to Nativity Parish in Midland Park till June of 1987. He was named Pastor of St. John the Baptist Parish in Fairview in June 1987 until February 1, 1999 when he was sent as Pastor to St. Michael/St. Joseph Parish in Bayonne until he retired on July 1, 2003. John maintained an active lifestyle, with skiing, cycling, and skating his favorite pastimes. He earned the rank of Eagle Scout, worked on the ski patrol at Mountain Creek, was a bronze level USFSA judge, and looked forward to his yearly ski trip to Colorado with longtime priest friends. After retirement, Fr. John assisted at Church of the Ascension in Bradley Beach, Church of the Assumption in New Egypt, and at Fort Dix. Visitation will be held at the Church of the Ascension, 501 Brinley Ave, Bradley Beach, N.J. on Thursday February 8 from 4pm to 7pm (with a vigil service at 7:30 pm) and Friday February 9 from 9am until the funeral mass at 10am. Interment to follow at Gate of Heaven Cemetery, East Hanover, NJ. In lieu of flowers donations in his memory to: Priest Care and Retirement Endowment Fund, making checks payable to Archdiocese of Newark, 171 Clifton Ave., Newark, NJ 07104.

The family of Rev John J. Gibbons created this Life Tributes page to make it easy to share your memories.

Send flowers to the Gibbons family.