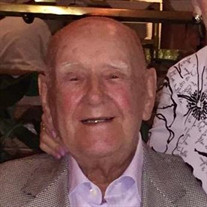 John Henry Sands of Seabrook Village in Tinton Falls, N.J. has passed away after 95 wonderful years of life, having been born July 9, 1924 to John Sands and Sarah (Cooper) Sands in Belfast, Northern Ireland. It was there that he met the love of his life who survives him, Catherine (Decker) Sands, his "Cath", whom he married during wartime 76 years ago this January. Together with their three young children, John and Cathy immigrated to the U.S. in 1950, ultimately settling in Kearny, N.J., where John pursued his passion and skill for soccer on a semi-professional basis. He also continued his kinship with those from the “Old Country” through his membership at the Ulster Club of Kearny and trips back to visit family and friends. His family was the pride and joy of this most gentle of patriarchs. For nearly 40 years, well into his 80s, John worked at A. Santini Moving & Storage which is owned by his sons, serving as Controller as well as office golf putting champion. That's if, in the later years, he and Cathy weren't enjoying winters in Florida with some of their dearest friends. John was happiest when surrounded with family, including his seven grandchildren and seven great-grandchildren who adored their “Poppi”. The many memories his family and others will carry in their hearts are of his gentle nature, his loving words, watching and playing soccer games, a glass of Scotch raised, his faith, laughter and so much more. John is survived by his wife Catherine; his children Charlie (Valerie), Catherine Hiler (John), and John (Adrianna); his grandchildren Marcus Sands (Rose Ann), Heather Sands, Carey Michaels (Andrew), John Sands (Nora), Alison Isaacson (Nathan), Caitlin Schott (Jake), and Morgan Hiler; and his great-grandchildren George and Amber Sands, Amanda and Mateo Jimenez, Landon and John Sands, and Reagan Schott. He was preceded in death by his siblings Richard, Sarah O’Rourke, George, and Charlotte Kempson. A private memorial service will be held at a later date. Donations in John’s memory may be made to Butterfly Wishes 67 Walnut Ave, Suite 205, Clark, NJ 07066 or to Seabrook Benevolent Care Fund 3000 Essex Road, Tinton Falls, NJ 07753. For online condolences, please visit John's memorial page at www.bongarzonefuneralhome.com

John Henry Sands of Seabrook Village in Tinton Falls, N.J. has passed away after 95 wonderful years of life, having been born July 9, 1924 to John Sands and Sarah (Cooper) Sands in Belfast, Northern Ireland. It was there that he met the love... View Obituary & Service Information

The family of John Henry Sands created this Life Tributes page to make it easy to share your memories.

Send flowers to the Sands family.