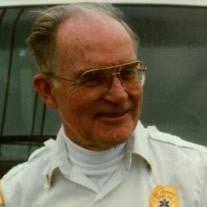 John J. Mc Cathy, 91, of Tinton Falls, NJ passed on Thursday 12/20/2012. John Justin McCarthy was born December 23, 1920 in Newark New Jersey. His parents were Joseph A. and Eva Slowey McCarthy. He attended St. Benedict's Prep in Newark. After high school, he worked for Lockjoint Pipe Company and attended Rutgers night school in Newark,NJ. He joined the US army and was part of the 12th Air Force Division. John spent much of his time in N. Africa and Italy and received the rank of Sargeant. Upon discharge from the army, he entered Indiana University in Bloomington, Indiana. He graduated in 1948 with a BA in Business, and later an MBA from Rutgers University. He married Eileen Loretta Higgins in November of 1949 and had three children. John worked at Mutual Benefit Life Insurance Company in Newark NJ for 40 years. He retired as a vice president in 1982. He was a member of the Bloomfield First Aid Squad for 40 years from 1961 till 2001. He also was a member of the Tinton Falls First Aid Squad for 48 years from 1964 till present. Serving Six years as a captain and was also their accountant. He was a paramedic for Monmouth County as well from 1966-1971 and worked closely with Monmouth Medical Center, Long Branch. He loved to help people. Family, friends and first aid were John's true loves. He loved to learn new things, and had a great sense of humor. He enjoyed spending summers at Ocean Beach NJ with the Mitchell's, and at Lake Keuka with the Wolf family. He was a man for all seasons and a man for everyone. We love you Jack! God Bless You! He was predeceased by his son, Brian McCarthy. John is survived by his wife of 63 years: Eileen Higgins McCarthy, his son and daughter-in-law John D. & Kathleen McCarthy, daughter and son-in-law Eileen M & Chet Wozniak, daughter in law Clara McCarthy Finney, sister Joan Clay, sister-in-law Rita Wolf, a Grandchildren, Anthony McCarthy, Jessica McCarthy Finley, Allison McCarthy, David Wozniak, Brian Wozniak, Great Grandchildren: Sydney Anne McCarthy and Anthony Brian McCarthy, Neices and Nephew: Sue Clay Fitzgerald, Jill Clay Halloran, Mary Clay, Ann Marie and Rudy Schatz, Terry and Dave Browning, Christine and Mark Quandt, Patty and Neil Sealander, Joseph and Gwen Wolf, Maureen and Don Wright, Cousins: Alice, Roger and John Mitchell, Michele and Tad Davis; Sandy, Clinton, Matthew, Chris, and Michael Plietz, Muriel McQuade & family and John Barker, the family nurse. Visitation will be on Sunday December 23, 2012 from 1:00 to 4:00 PM at Bongarzone Funeral Home, 2400 Shafto Road, Tinton Falls. A Funeral Mass will be held on Monday, Dec 24, 2012 at Church of Saint Anselm, 1028 Wayside Road, Tinton Falls at 10:00AM. Interment to follow at Holy Sepulchre, East Orange. Flowers will be accepted or donations can be made in his memory to the Tinton Falls EMS, 46 Old Mill Road, Tinton Falls, NJ 07724.

The family of John J. McCarthy created this Life Tributes page to make it easy to share your memories.

Send flowers to the McCarthy family.