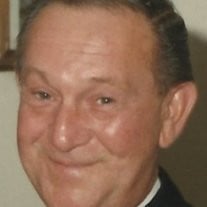 Kenneth William Sneath, a long-time resident of Eatontown, died Saturday, the 17th of August after a courageous five year battle with cancer. Ken was born March 20, 1939 in Jersey City, N.J., the son of Austin Sneath and Anne (Custer) Sneath. He moved with his family to Highlands, N.J. when he was 18 and was a 1957 graduate of Schneider High School. He served in Korea for the United States Army. He worked for and retired from the New Jersey Transit Police in 2000, after 35 years of service. Ken was known for the pride he had in his family, his home and his cars, especially his convertible. He relaxed working around the house and in his yard. He loved watching sports, particularly rooting (and sometimes yelling at the TV) for the New York Yankees and the New York Giants. He loved his two dogs, Chico and Maxi. Ken was a long time parishioner of St. Dorothea’s Church and was a member of the Knights of Columbus, Council 12620. Ken loved his grandchildren and the Ryan ‘Happy Birthday, No Way’ Video and Teresa’s ‘Hey Popsicle’, always put an instant smile on his face. He is survived by his wife of forty years, Rosalie (Gaetano), his three children, Kellie Campbell, West Long Branch, her husband Jack, Dana Yenesel, Oakhurst, her husband Richard, Kenneth A., his wife Rebecca of Eatontown and his six grandchildren, Richard Joseph (R.J.), Samantha, Teresa, Jack, Brandon and Ryan. Also surviving is his sister, Gladys Egan, twelve nieces and nephews and thirty-four grand-nieces and nephews. Visitation will be held on Wednesday, August 21, 2013 from 5-9PM at Bongarzone Funeral Home, 2400 Shafto Road, Tinton Falls. A funeral mass will be offered on Thursday, August 22, 2013 at 10:30AM from St. Dorothea’s Church, Eatontown. Entombment will follow at Woodbine Cemetery & Mausoleum, Oceanport. In lieu of flowers, donations may be made in his name, to: CHOP, the Children’s Hospital of Philadelphia, giving.chop.edu or Rollout the Ribbons, www.rollouttheribbons.com or the Ronald McDonald House www.philarmh.org, all of which held a special connection to him.

The family of Kenneth W Sneath created this Life Tributes page to make it easy to share your memories.

Send flowers to the Sneath family.