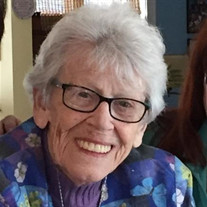 MARGARET "RUTH” STRAUSS, 93 of Hazlet, passed away peacefully Sunday August 12, 2018 in the company of family and friends. Ruth, as she preferred to be known, was born February 8, 1925 in Englewood Hospital to Helen and James Ganley of Coytesville, NJ. She attended grammar school In Englewood Cliffs, NJ and Fort Lee High School. She had 3 younger brothers, James (Frank), Robert (Bobby), & Donald Ganley. While commuting to work at City College, she met her husband Frederick W. Strauss who worked at Bonwit Teller & Co. in New York City. They married on September 8, 1925, had 2 children and lived most of their lives in Ridgefield, NJ. After her children were grown, she took a job working for the Boro of Ridgefield, as the assistant to the Civil Defense Director until moving to Wanamassa/Ocean, NJ in 1995. Ruth loved to garden, sew, and do puzzles but most of all be with family. She loved to tell stories to her children, cousins, nieces, nephews, and grandchildren about the family and things they did growing up. Ruth and Fred were married for 53 years until his death in 2004. At that time, she moved to Little Sliver with her daughter and her two children. From 2014 until her death, she lived in Hazlet with her son and his family. She is survived by her daughter Kathleen Strauss and her children Scott & Skylar Heilos of Little Silver. Her son William R. Strauss (Bill), his wife Catherine (Cathy) and their daughter Taylor of Hazlet and granddaughter Joan Strauss. Ruth requested no funeral service and in lieu of flowers, donations be made in her memory to St. Jude Children’s Hospital PO Box 50 Memphis TN 38101_ 9929 or stJude.org.

MARGARET "RUTH&#8221; STRAUSS, 93 of Hazlet, passed away peacefully Sunday August 12, 2018 in the company of family and friends. Ruth, as she preferred to be known, was born February 8, 1925 in Englewood Hospital to Helen and James Ganley... View Obituary & Service Information

The family of Margaret (Ruth) Strauss created this Life Tributes page to make it easy to share your memories.

Send flowers to the Strauss family.