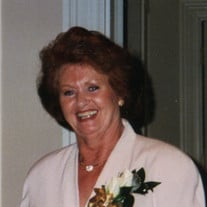 Margaret Shaloo passed away on January 31st. The eldest daughter of John William and Mary Carty, Margaret was born in County Leitrim, Republic of Ireland and grew up on the family farm. She immigrated to this country at the age of 17, traveling by herself via ocean liner to New York. Margaret first worked as a nanny in Deal and as a model for Steinbach’s in Asbury Park. At 19 she met and married Robert James Shaloo, then a SFC assigned to Fort Monmouth. Margaret spent the next 25 years of her life as a military spouse, moving her extending family around the world. By herself she traveled from New Jersey to Adak, Alaska with 3 small children. While stationed there, Margaret and Robert lost their fourth child, Kevin, who is buried at Fort Richardson National Cemetery. She moved her family around the world. But Fort Monmouth was always home, and this is where the family settled when they bought a house in Tinton Falls in 1971. She lived here with her five children during the year Robert was stationed in Vietnam with the 101st Airborne Division. Later, they kept the house while stationed in Germany, where Margaret served as the spouse of the senior enlisted person of the 7th Signal Bde. When they returned to New Jersey and as her family grew older, Margaret developed her own career in the hospitality industry. Over the years she worked for different hotels and restaurants in the area, to include management at the Molly Pitcher Hotel in Red Bank, and for Sheraton Corporation. Margaret took great pride in her work and success in the business world. . Margaret became a citizen of the United States of America in 1966 and took great pride in that accomplishment. And she and Robert took real pride in their shared Irish heritage. With their large family from both sides, the Shaloo family always celebrated its heritage as proud Irish-Americans. Music, dance, great storytelling, and laughter were always present at family gatherings. Ultimately, Margaret always was a person and mother who really cared about the lives of her children, no matter their age. Robert died in 2001 and Margaret spent the next year in Virginia recuperating from a heart attack she suffered during his funeral. But she returned to New Jersey and her home in 2002 where she spent the remaining years enjoying her home and her family. But Margaret was suffering the beginnings of dementia, and it escalated this past year after falls that twice broke her hip. She spent the past five months at home, assisted by hospice and surrounded by family. She finally decided to move on and join her husband and family members who have gone before, including her parents and her brother, John J. Carty. Left to remember her and miss her always are her children, Barbara Shaloo of Tinton Falls, NJ, Robert and Anna Shaloo of Freehold, NJ, Patricia and Michael Gawrilenko of Jackson, NJ, Colleen and William Harris of Virginia Beach, VA, and Maureen and Steven McConnell of West Rutland, VT. She has left two lovely granddaughters, Megan Shaloo of Bradley Beach, NJ and Ashley Shaloo of Alfred, NY, as well as stepchildren and step-grandchildren. Margaret is also survived by her brother, Michael Carty of New York, NY and sister Kathleen Sheridan of Yonkers, NY and numerous nieces, nephews, and cousins on her side of the family. And she also leaves many members from Robert’s family throughout the country who loved her and will remember her. Tá grá agat. An chuid eile i síocháin i gcónaí. (You are loved. Rest in peace, always.)   Visitation will be held 2-4pm and 7-9pm on Thursday February 8, 2018 from the Bongarzone Funeral Home, 2400 Shafto Road, Tinton Falls. A funeral mass will be 1:00pm Friday February 9, 2018 at the Church of St. Anselm, Tinton Falls. Burial will take place at Arlington National Cemetery at a later date. In lieu of flowers donations in her memory may be made to St Jude Children's Hospital (stjude.org) or to Catholic Charities.

Margaret Shaloo passed away on January 31st. The eldest daughter of John William and Mary Carty, Margaret was born in County Leitrim, Republic of Ireland and grew up on the family farm. She immigrated to this country at the age of 17, traveling... View Obituary & Service Information

The family of Margaret M. Shaloo created this Life Tributes page to make it easy to share your memories.

Margaret Shaloo passed away on January 31st. The eldest daughter...

Send flowers to the Shaloo family.