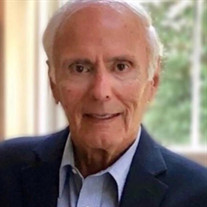 Michael Louis Carousis, of Manasquan and formerly of Short Hills, NJ, passed away peacefully at home on May 3rd surrounded by his devoted family. He was born on September 30, 1929 and raised in Orange, NJ to Kaliope and Louis Carousis. Michael earned his Bachelor of Science Degree in Accounting from New York University. He proudly served in the U.S. Army during the Korean War and was promoted to the rank of Sergeant. His enduring patriotism was evident in his love for his country and support of Veterans Affairs. Michael always emphasized the importance of answering the call to serve others. He was an active member and past President of the East Orange Lions Club for many years. A successful businessman who retired at the age of 49, Michael owned and operated several Howard Johnson’s Restaurants and Motels. He was a founding member and Vice-Chairman of the Lincoln Savings Bank Board of Directors and later became Vice-Chairman of the Dreyfus Consumer Bank and Director of the Mellon Bank F.S.B from 1974-1996. He was also involved in real estate development projects in Middlesex County. Michael was a man of devout faith and a lifelong steward of the Greek Orthodox Church. He served on the Board of Sts. Constantine and Helen in Orange and was an active parishioner at both Holy Trinity in Westfield and St. George in Ocean. In 1969, Michael was vested with the title Archon Depoutatos from Patriarch Athenagoras I, the highest honor that can be bestowed upon non-clergy by the Ecumenical Patriarchate of Constantinople. Michael was an exceptional husband, father, grandfather, brother, uncle, and friend. Family was everything to him. He is survived by his loving wife of 61 years, Vannette Carousis (née Michals) of Manasquan; a son, Elias M. Carousis of Spring Lake; a daughter, Elena M. Coniaris and her husband, Harry J. Coniaris, M.D. of Colts Neck and his four beloved grandchildren whom he cherished Chloe, Chelsea and H. John Coniaris and Damara Carousis. He also leaves behind a sister, Mary Pappas of Ponte Vedra Beach, FL and many nephews, nieces and close friends. In addition to his parents, Michael was predeceased by his siblings Constantine and Irene. To know Michael was truly a blessing. His innate gift was making all those around him feel special, valued and loved. Michael’s unwavering selflessness, kindness and support for others will be his everlasting legacy. May his Memory be Eternal. Services will be held on Monday, May 10, 2021 at St. George Greek Orthodox Church, 1033 West Park Avenue in Ocean. Visitation will take place from 10-11 AM immediately followed by the Church service from 11-12 PM. Interment will be at Fairview Cemetery in Westfield. In lieu of flowers, donations may be made to St. George Greek Orthodox Church or the Wounded Warrior Project ( https://support.woundedwarriorproject.org/Default.aspx?tsid=10043 ). **Masks must be worn on the nose and mouth inside the church at all times. Thank you for your kindness during this difficult time.**

Michael Louis Carousis, of Manasquan and formerly of Short Hills, NJ, passed away peacefully at home on May 3rd surrounded by his devoted family. He was born on September 30, 1929 and raised in Orange, NJ to Kaliope and Louis Carousis. Michael... View Obituary & Service Information

The family of Michael Louis Carousis created this Life Tributes page to make it easy to share your memories.

Michael Louis Carousis, of Manasquan and formerly of Short Hills,...

Send flowers to the Carousis family.