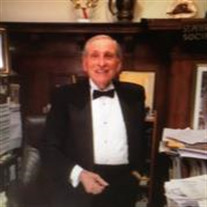 Community Will Miss Michael Halkias: Entrepreneur, Philanthropist, Friend NEW YORK – Michael ‘Mike’ Halkias, the ebullient businessman and philanthropist famous in the wider New York community as the proprietor of the Grand Prospect Hall catering facility in Brooklyn and among Greek-Americans for the support he granted worthy causes, organizations, and individuals – including presidential candidate Michael Dukakis – has passed away at the age of 82. A unique man; a pioneer; a proud American and Hellene and devoted son of the island of Chios, he fought a heroic battle to the end against the coronavirus. Especially devoted to Chios, where his family has roots, Michael Halkias was always open to learning how he could help fellow Americans and Hellenes and their causes, whether though financial or moral support, or discussions that generated ideas for endeavors and courses of action. Michael Halkias as born September 6, 1937 in Pittsburgh, PA and was a graduate of Hellenic College/Holy Cross, where he received his Masters of Divinity in 1964. After graduation he moved back to his home in Pittsburgh, PA where he was a Greek School and Sunday School Director for his home parish. Subsequently, he moved to New York and worked for the National Herald selling advertising for the newspaper. While at the paper he attended Transfiguration Church in Corona, Queens, where he was a chanter and assisted the parish in various ways. After leaving the National Herald he met his lovely bride Alice at the travel agency where he was a manager. Michael Halkias opened up his own travel agency and married his wife Alice in March 1967. He also published a bi-weekly/bi-lingual newspaper called the Greek American and later opened his own employment agency and became a real estate investor. In 1981 he came across an old German Opera House in Brooklyn’s Park Slope, an area whose rebirth and development he foresaw. Halkias sold all his real estate holdings to raise the money to purchase the building and revive its facade glory, turning it into a Brooklyn landmark that was in demand for special events and TV and movie filming. Renamed the Grand Prospect Hall, he created a 42,000 square foot catering facility featuring lovingly and painstakingly restored fin de siècle spaces crowned by the grand staircase where he and his wife Alice and business partner promised on their now-iconic TV advertisement, “we make your dreams come true.” Together they ran the establishment for 39 years, making realities of the dreams of many brides and grooms and delighted parents, hosting baptisms, bar mitzvahs, graduations, and other milestones for children of all backgrounds and ethnic groups in multicultural Brooklyn and the wider New York area come true. Michael Halkias is survived by his wife Alice Halkias, his children, Josephine M. Tsarnas, Elias Halkias and Demetrios Halkias, his son-in-law Emanuel G. Tsarnas, his daughter-in-law Evangelia Halkias, grandchildren, Michael Halkias, Stephanos E. Tsarnas, Evangelos E. Tsarnas, Aliki Anna Halkias and Mihalis Halkias, and great granddaughter, Despina Halkias, his sisters Maria Sklavounakis, Anna May Matey, and Frances Hattman. Michael Halkias was pre-deceased by his father Elias Halkias and his mother Josephine Jordan Halkias. All services will be private at this time. Michael will be laid to rest in St. George Greek Orthodox Cemetery in Neptune, NJ. In lieu of flowers, donations in Michael's memory may be made to Hellenic College Holy Cross in Brookline, MA ( https://www.hchc.edu/give ). Everlasting be his memory.

The family of Michael Halkias created this Life Tributes page to make it easy to share your memories.

Send flowers to the Halkias family.