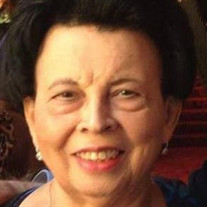 Natividad (Natalie) M. Canto, 78, of Ocean Twp., passed away peacefully on Saturday September 19, 2020 at JSUMC, Neptune surrounded by her loving family. She was born in Cabo Rojo, Puerto Rico on December 28, 1941 and raised in Puerto Rico before coming to the United States with her family in 1948, settling in New York City. She graduated from the High School of Commerce in 1959 and then attended secretarial school. She began her career as an Executive Secretary in the finance industry working for Bank of America and eventually joined Bank Leumi, New York agency where she met her future husband Benjamin J. Canto. Their first date was on Valentine’s Day and a lifelong love blossomed; they were married on July 24, 1965. She continued to work until their daughters, Mary Elizabeth and Rose Ellen were born. The young family relocated to Middletown, NJ in 1981. Later Natalie returned to work in the title insurance industry until she and Ben retired to Ocean Township, NJ. Her hobbies included cooking, sewing, and gardening. Her greatest joy was being a devoted wife, mother, and grandmother. She was predeceased by her parents Carmen Negron Martinez and Manuel Martinez, a sister Araceli Martinez. She is survived by her husband of 55 years, Benjamin Canto, her two daughters: Mary and husband Michael Rice and Rose Ellen Canto. She is also survived by her three grandchildren: Thomas, Nicholas, and Katherine Rice. Visitation will be from 4pm to 8pm on Thursday September 24, 2020 at the Bongarzone Funeral Home, 2400 Shafto Road, Tinton Falls. A funeral mass will be offered 10:30am on Friday September 25, 2020 at St. James RC church, 94 Broad Street, Red Bank. Interment to follow at Mount Olivet Cemetery, Middletown. In lieu of flowers, donations may be made in Natividad’s memory to the St. Jude children’s research hospital, 501 St. Jude Place, Memphis TN 38105-9959 or to https://fundraising.stjude.org/site/TR/GiftFunds/GiftFunds?px=6767588&pg=personal&fr_id=39300

Natividad (Natalie) M. Canto, 78, of Ocean Twp., passed away peacefully on Saturday September 19, 2020 at JSUMC, Neptune surrounded by her loving family. She was born in Cabo Rojo, Puerto Rico on December 28, 1941 and raised in Puerto Rico before... View Obituary & Service Information

The family of Natividad M. Canto created this Life Tributes page to make it easy to share your memories.

Send flowers to the Canto family.