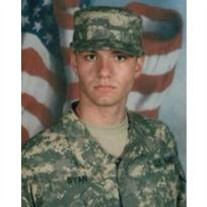 Patrick J. Ryan, 21, of Tinton Falls, passed away on February 7, 2009 at Jersey Shore Medical Center, Neptune, NJ. A lifelong resident of New Jersey, Patrick was recently discharged from the United States Army and returned to live within the love and safety of his family. He is predeceased by his brother Brian Crowley, his natural father Brian C. Crowley, his Grandmother Geraldine Carpentieri, his Grandparents William and Dorothy Ryan and so many others who welcomed him home. With a sad yet hopeful heart he is survived by his brother Michael Ryan, his father William J. Ryan, Jr., his mother Bonnie Crowley, his grandfather John Carpentieri, his aunt and uncle Kathleen and Richard Wolff, his uncle James Ryan and aunt Barbara Backer as well as his cousins Matthew and Maureen Wolff and Katie and Bessie Ryan. Pat’s survivors also include friends beyond measure both in numbers and their ability to love. Patrick attended both Cardinal McCarrick High School, South Amboy, New Jersey and Monmouth Regional High School, Tinton Falls from which he graduated in June, 2006. Patrick loved TaeKwonDo which he studied at Ganguly’s Martial Arts Academy in Ocean. He played soccer, ran track, traveled the United States, especially to Disney World, and looked forward to going to Ireland one day. Mostly though, Pat’s faith gave him the strength to be that special person to everyone he ever met.

The family of Patrick James Ryan created this Life Tributes page to make it easy to share your memories.

Patrick J. Ryan, 21, of Tinton Falls, passed away on February...

Send flowers to the Ryan family.