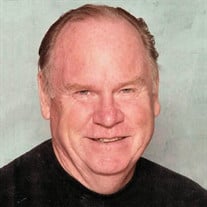 Ralph Michael Steinberger, 87, of Freehold, formerly of Claiborne, MD and Tinton Falls, NJ, died on Tuesday, April 2, 2019, at CentraState Medical Center, Freehold. Born on Sept. 3, 1931 in Union City to the late Theodore Sr. and Edna Gates Steinberger, he graduated from Eastside H.S., Paterson in 1949. Ralph served his country in the New Jersey National Guard from 1950 to 1957. He was married to Mary Fahey on Sept. 29, 1956, residing in the house he built in Tinton Falls until retiring to Claiborne, MD in 1989 where he lived until 2018. Mr. Steinberger spent most of his career as a draftsman working for EAI, Bendix and Allied Signal. He was an avid “do-it-yourselfer” who built houses and boats and enjoyed sailing, gardening, painting, woodworking, and pottery. He is survived by his daughter, Ann Steinberger of Neptune City; son, Michael and wife, Michelle of West Chester, PA; daughter, Karen Steiner of Tinton Falls; son, James and wife, Holly of Tinton Falls; son, Timothy and partner, Kathy Kirk of Roseland; brother, John and wife, Jeanette, Spotsylvania, VA; sister Mary Hermans , Towson, MD; sisters-in-law, Marge, Howell, and Marilyn, Marco Island, FL; 11 grandchildren; 5 great-grandchildren, as well as many cousins, nieces and nephews. Along with his parents, Ralph was predeceased by his wife of 57 years, Mary; and his brothers Ted and Allen. Friends may call on Sunday, April 7, 2019 from 2 – 4 pm at Bongarzone Funeral Home, Tinton Falls. A funeral mass will be celebrated at Holy Innocents Church, Neptune on April 8, 2019 at 10:30 am and burial will follow at St. Catharine's Cemetery, Sea Girt.

The family of Ralph M. Steinberger created this Life Tributes page to make it easy to share your memories.

Send flowers to the Steinberger family.