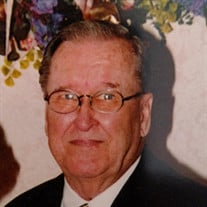 Richard G. Balmer, Sr. , 95 of Seabrook Village, Tinton Falls passed away on Monday, October 16, 2017. He was born in Jersey City, NJ on November 4, 1921. He was a graduate of Snyder High School in Jersey City, and obtained his degree in finance from St. Peter’s College. He lived in Jersey City until meeting the love of his life, Margaret G. Slater. After their marriage in May 1947, they moved to Little Silver, New Jersey where they lived and raised their family for 40 years. He was a recent resident of Seabrook Village, where he lived for the past 10 + years. Richard proudly served as a Corporal assigned to the 311th Infantry Regiment of the U.S. Army Infantry, serving from 1942 until February 1945 where he was sent stateside due to a combat injury. He was a decorated war hero, receiving the Purple Heart, Bronze Star, World War II Victory Medal, American Campaign, Good Conduct Medal and the European, African, Middle Eastern Campaign Medal. He was honorably discharged in 1948. Richard used his degree in finance work as a banker in various financial institutions before serving and retiring from his position of Financial Officer, Ft. Monmouth, NJ. Richard was predeceased in death by his wife of 67 years, Margaret Balmer. He is survived by his son, Dr. Richard G. Balmer, Jr. and his wife Kelly of Pennsylvania, his daughter Susan and her husband Alan of Georgia. He had four Grandchildren, Stanley Balmer and his wife Heather, Brain Balmer and his wife Jennifer, Kelly Giorno and her husband Richard, and Kevin Kooistra and his wife Jenna. He was blessed with six Great Grandchildren, Victoria Giorno, Walker Giorno, Brielle Balmer, Brody Balmer, Quinn Kooistra and Colton Kooistra. Richard was life long member of St. John’s Episcopal Church in Little Silver, New Jersey. A private memorial service and burial of cremains will be at St. John’s at a later date. In lieu of flowers, donations may be made in his memory to St. John’s Episcopal Church, Point Road, Little Silver, New Jersey.

Richard G. Balmer, Sr. , 95 of Seabrook Village, Tinton Falls passed away on Monday, October 16, 2017. He was born in Jersey City, NJ on November 4, 1921. He was a graduate of Snyder High School in Jersey City, and obtained his degree in... View Obituary & Service Information

The family of Richard Balmer Sr. created this Life Tributes page to make it easy to share your memories.

Send flowers to the Balmer family.