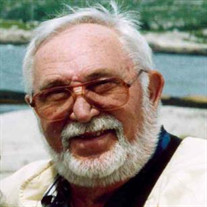 Richard E. Hubbs, 86, of Tinton Falls, formerly of Monmouth Beach, a loving husband, father and friend, passed away on Sunday July 5, 2015. Richard (Dick) was born on May 26, 1929 to Leon and Mae (nee Rue) in Bradley Beach, N.J. Richard attended Asbury Park High School, Monmouth University and graduated from Duke University. He was a veteran of the U.S. Army serving in the Korean War before marrying his wife Elizabeth. He had a successful career in the Insurance Industry beginning with American Mutual and ending with the sale of his own Insurance Agency, The Captain’s Agency, to his son-in-law, Robert, to enjoy retirement. Richard and Elizabeth raised their family in Matawan, N.J. after a brief stay in upstate N.Y. It was here that he contributed to his community by serving on various Boards, including Matawan Rotary, Matawan Chamber of Commerce, Bayshore YMCA to name a few. While working in the Insurance Industry, he was an active member of IIANJ and served on the Board for many years as well as a member of YAC. He is preceded in death by his parents, Leon and Mae Hubbs, his sisters, Laura (Ken) Napier and Ethel (Bob) Megill. He leaves to cherish his memory, his wife of 62 years Elizabeth and 3 daughters; Virginia (Jim) O’Neill, Joyce (Glenn) Totino, and Patricia (Robert) Aitkens. Six grandchildren, Dan and Chris O’Neill, Lisa Totino, Karen Churnin, Brian and Katie Aitkens. As well as many nieces and nephews. A memorial service will be held on Saturday August 8, 2015 from 3-5pm at Bongarzone Funeral home, 2400 Shafto Road, Tinton Falls. In lieu of flowers donations in his memory can be made to the Michael J. Fox Foundation for Parkinson Research, P.O. Box 5014, Hagerstown, MD 21741-5014. www.michaeljfox.org,

The family of Richard E. Hubbs created this Life Tributes page to make it easy to share your memories.

Send flowers to the Hubbs family.