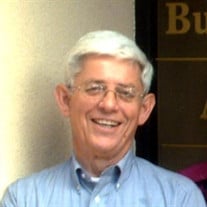 Richard “Rich” Thomas Savare, 80, of Ocean Township, passed away at home with his family on February 24, 2021 after a brief, but brave, battle with pancreatic cancer. Rich was born on October 23, 1940 to Romeo “Jack” and Margaret Savare in Orange, New Jersey. He and his two sisters, Paula Savare Berg and Susan Savare Suozzo grew up in Neptune City, NJ. He was a graduate of St. Rose Catholic High School in Belmar where he played on the school basketball and baseball teams. After high school, Rich attended Monmouth University before enlisting in the US Army where he was in the Signal Corps. Rich married his high school sweetheart Anne Savare (Malanga) prior to being stationed in Germany. Following his honorable service to the military, he and his father worked at Bendix Corporation. Rich then went on to work for Bell Labs and AT&T in Holmdel for over 30 years before retiring in 1998. Anyone who knew Rich knew that he was the most loving, devoted, and selfless husband, father, and grandfather a family could ask for. Rich and Anne raised five children in their Ocean Township home. His family meant more to him than anything else in the world. Perhaps so much so that all his love and worry for their well-being caused his infamous thick, white head of hair at an early age. He is survived by his loving wife of sixty years, Anne Savare, their five children and their spouses: Rich and Kathy Savare of Oakhurst, NJ, Lauren and David Walsh of Howell, NJ, Matthew and Jodi Savare of Scotch Plains, NJ, Marc and Kristen Savare of Ocean, NJ, and Nicole and Joe Sellitto of Tinton Falls, NJ. He is also survived by nine grandchildren who adored him: Jack Savare, Nicholas Savare, Alexandra Savare, Mia Savare, Michael Savare, Caitlyn Savare, Riley Savare, Charlotte Sellitto, and Isabella Sellitto. Also surviving are his sister, Susan Suozzo and husband Bill Suozzo of Wall Township, NJ, brother-in-law Lawrence Malanga and wife Irene Malanga of West Palm Beach, FL, and brother-in-law Michael Malanga of FL. He also has many nieces and nephews, most of whom live in the Monmouth County area. Rich was predeceased by his parents and his sister, Paula Berg. Rich loved gardening and yard work. Friends and neighbors would see Rich in his yard every day wearing his signature white undershirt and ripped blue jeans with a pack of Marlboro cigarettes rolled in his sleeve. His backyard was a majestic and colorful menagerie of many different plants, and when in bloom, it was his favorite place to be. Every spring, he beamed with pride at all the work and love that went into such a bright display. Rich coached his children in club soccer, and he was a founding member of the Ocean Township United Soccer Association (OTUSA) when it was established in 1975. His legacy continued with Rich and Matt, who previously coached in the same club, and Marc who still coaches his own girls in OTUSA today. When he wasn’t coaching, he was usually on the sidelines – no matter where the game or practice was being held – cheering on his children and grandchildren and often offering his unique perspectives to the referees. Rich was also an avid New York Giants fan and loved to spend time at Monmouth Park Racetrack and Atlantic City, where he was always trying to hit that elusive jackpot on video poker. Prior to COVID, Anne and Rich were devoted parishioners of St. Michael’s Church in West End, NJ, and attended weekly mass there for decades. In lieu of flowers, the family requests any donations be made to the Valerie Fund for pediatric cancer research (visit https://www.thevaleriefund.org/Walk2021/team.php?team=335), St Jude Hospital, or Shriners Hospital for Children. The family will hold a private funeral service due to COVID.

The family of Richard Thomas Savare created this Life Tributes page to make it easy to share your memories.

Send flowers to the Savare family.