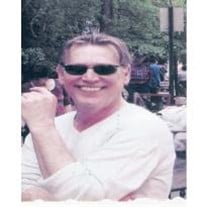 Richard Farrar Theobald, 56 passed away on March 25, 2008. During his three month battle with cancer, his caretaker was his nephew, JV Spangle. He is survived by his wife of30 years Teresa (Sherwin), his two children, Christopher and Sara, his mother Belle, six sisters, Adeline Theobald, Priscilla Spangle, Lucinda Fornaro, Elizabeth Theobald, Jake McCarthy and Gina Plage, two brothers, Calvin and Perry and 19 nieces and nephews. He was predeceased by his father Calvin Coolidge Theobald and his brother Michael. Richard grew up in Kearny, NJ, raised his family in Little Silver, NJ and has been residing in Manhattan. He received his Bachelor of Arts from Bloomfield College. He was the proud owner of Mid Atlantic Vegetable Shortening Company along with his two brothers. Richard was the Vice President of his company in charge of sales for 28 years. He worked at the Theobald Industries and Harrison-By-Products where he held a gold seal in Steam Generation and Refrigeration. He was an active member of the American Fats and Oils Association and the Philadelphia Bakers Club. He was a member of the Sons of the American Revolution and the Mayflower of New Jersey. He loved Broadway and starred in "Lady Mindys". Richard had a love for music. He played the guitar and organized "The 2001 Man Band" with his brothers as early at 1967. He took great pride in doing the Sunday New York Times crossword puzzle. He traveled extensively and was truly a brilliant man. He will be missed by many friends from the Perry Street Workshop; Karl, Lillian, Earl, David, Jamie and especially Lisanne McDonald. They have loved and supported him through troubled as well as good times. Richard will be remembered for his work ethic, his generosity, his clear blue eyes and his charming smile. We lost a brother who was a big part of our life but we know his soul is with others whom we hold dear to our hearts.

Richard Farrar Theobald, 56 passed away on March 25, 2008. During his three month battle with cancer, his caretaker was his nephew, JV Spangle. He is survived by his wife of30 years Teresa (Sherwin), his two children, Christopher and Sara,... View Obituary & Service Information

The family of Richard F. Theobald created this Life Tributes page to make it easy to share your memories.

Send flowers to the Theobald family.