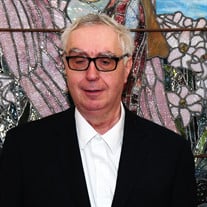 Robert Scranton Kelsey, 69, of Seabrook Village, Tinton Falls, NJ , died Tuesday September 12, 2017 at the Jersey Shore University Medical Center, Neptune after a short illness. He was born in Washington D.C. and raised in University Park, MD. He graduated from Northwestern High School, Hyattsville and Lear Siegler Computer School. He was a computer operator for the Federal Government for over thirty years and retired from the major Social Security Data Center in Woodlawn, MD. He moved to Seabrook Village in April of 2015 and became a member of the Presbyterian Church on the Hill. He leaves behind a brother, Edward Kelsey and a sister-in-law Laura Kelsey of Eatontown, NJ; a sister, Harriet Kelsey Oliver and a brother-in-law Donald Oliver of Columbia, MD; a niece, Loryn Baglione and her husband Gianpaolo Baglione of Columbia, MD; a nephew, David Oliver and his wife Anne Oliver of Alexandria, VA; and two step-nieces, Pam Renick and Heather Fuller of Jackson, NJ. In addition, Robert leaves three great-nephews and three great-nieces. Graveside service will be held at 11 AM on Saturday, September 16 in Glenwood Cemetery, West Long Branch. In lieu of flowers, donations may be made to The Presbyterian Church on the Hill, 10 Cold Springs Road, Ocean, NJ 07712. For online condolences, please visit Robert’s memorial page at www.bongarzonefuneralhome.com

The family of Robert S. Kelsey created this Life Tributes page to make it easy to share your memories.

Send flowers to the Kelsey family.