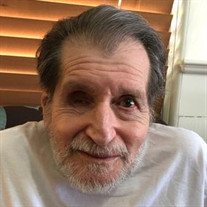 Emily and I are deeply saddened to say that our father Ron Frangipane has passed away April 25th at the age of 75, having succumbed to Covid-19 pneumonia. Our daddy led a colorful, zany, beautiful life. When there was no guarantee of his survival after his injuries sustained during hurricane Sandy, God granted him nearly a decade in which time he welcomed two grandchildren. Our father was a musical wizard, a comedian, and a sweet, sensitive soul. Beyond his family, music was the greatest love of his life. I’ve never heard a piano sound more exquisite or seen a man so passionate while making it sing. He was a brilliant man, and a shining light who impacted and mentored many students at Monmouth University where he was a professor of music. But he also impacted countless others and helped sculpt pop culture during a music career that spanned decades. As a pianist, accordionist, saxophonist, composer, producer, arranger, orchestrator, conductor and sideman, my father can be heard playing on countless records from Sugar, Sugar to John Lennon’s Happy Christmas. From the iconic hooks of Daydream Believer and I’m A Believer to Jodorowsky’s The Holy Mountain and Mic Jagger’s Ned Kelly. From The Cowsills to Melanie, Janis Ian to Jimi Hendrix, Gene Simmons to Grace Slick and far too many others to mention, I’m proud to say that my father touched countless music, film, TV and Radio fans around the world. In the 1980s he wrote jingles and station identification for many radio stations and music for television in several countries. His genius astounds me. He was one of the hardest working people I have ever met. He started working at 13 and never stopped. But there was so much beyond his career that made Ron the wonderful parent, son, friend and character he was. He could sit from 6AM to 8PM on the dune beaches of Cape Cod with all of us and his best friend crazy Uncle Stevie with a book, pair of headphones and tanning oil and be as happy as a clam. He truly loved Cape Cod and the joy of a family vacation. His best friends Jill and Steven Sawyer and their son Devin would frequently vacation with us, usually renting their own home right next to ours, and Ron would find some of his happiest days on Earth there. He took us to Broadway and the Bronx Zoo. To Yankees games and Disney; what he called ‘field trips’. And thanks to ‘a guy’ he knew, he always procured the best seats in the house. He was a nut, but the most gentle, loving nut you’d ever meet. He was truly a shining light; a beacon of bright color, fine suits and wild dark waves of hair. Everyone knew when Ron entered the room. And if you ask anyone who has had the pleasure sitting at the dinner table with him (and especially if it was at a restaurant) and they will tell you of our father’s many many stories. Stories of the music industry, stories of life and truly some of the funniest stories you’d ever hear. Incredible feats of rescuing a Great Dane named Blanco who jumped off a yacht in the East River while wearing a pair of Pallazo pants; The man that is, not the dog. Stories of being chased down the Merritt Parkway by a giant wooden telephone wire spool and stories of the close bond between him and his own father forged, in part, by countless deep-sea fishing voyages. They will also tell you of a man whose love of art, food, world travel, romance, and music inspired them and frequently changed them for good. Most of all, he was an incredible father. He was our hero, our greatest supporter, and our friend. He was mad as a hatter, hysterically funny, and as gentle as a kitten. He loved Mel Brooks, and we would quote lines from The Producers and howl. He loved his animals and treated them better than he treated himself. His kindness was boundless. He gave of himself to anyone who asked, even if it was to his detriment. We were never in doubt of his love. Ron leaves behind his ex-wife and friend till the end Susan Knowlton, daughter Emily and son Gregory, his two grandchildren Wyatt and Sofkuri, his daughter-in-law Colleen, best friend Jill Sawyer, and many other sad hearts. Greg’s last words to his father are: It was my honor to have been your caretaker for the 7 years after your accident. I can hear your voice echo in my ears saying “goodnight Son, I love you. Sweet dreams” as I would help you to bed. I will never stop missing you. Goodbye my dear father. I love you. Emily’s last words to her father are: I will miss you more than you will ever know. I will be holding your thumb for the rest of my life. I love you Daddy. In lieu of flowers, we ask that you please make a donation in Ron’s name to the New Jersey Traumatic Brain Injury Fund- BIANJ. All services are private private, memorial gathering will be held at a later date.

Emily and I are deeply saddened to say that our father Ron Frangipane has passed away April 25th at the age of 75, having succumbed to Covid-19 pneumonia. Our daddy led a colorful, zany, beautiful life. When there was no guarantee of... View Obituary & Service Information

The family of Ronald George Frangipane created this Life Tributes page to make it easy to share your memories.

Emily and I are deeply saddened to say that our father Ron Frangipane...

Send flowers to the Frangipane family.