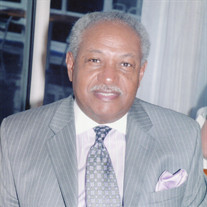 Blessed are the dead which die in the Lord from henceforth: Yea, saith the Spirit, that they may rest from their labours; and their works do follow them. (Rev. 14:13) Roscoe Williams, 79, was born to the late Henry S. and Sophfronia White Williams, March 15, 1939 in St. Louis, MO. He was called to eternal rest April 6, 2018 in Brick, New Jersey. He was preceded in death by his lovely and devoted wife of 34 years Deaconess Charlesetta Williams, Sisters Lavelle Jacquess, Annie Mae Moore and Alma Lee Woodson. Roscoe leaves to cherish his memory: two daughters Deborah Y. Williams, Baltimore, Md., and Dr. Andrea Williams, Waldorf, Md., one son, Garrick Williams, and wife, Carole of Toms River, N.J., six grandchildren, Rian Savage (Miami, FL), Eric Williams (Flagstaff, AZ), Indigo, Austin, Autumn, and Jada Williams, brother Chester P. Williams, sister Dorothy B. Williams, and sister-in-law Sandra A. Miller, St. Louis, MO and a host of loving nieces, nephews, cousins, and other relatives and friends. Roscoe loved to travel and one his most favorite sites was Aruba, a very popular island resort in the Netherlands, West Indies. He was employed with the US Government Civil Service for many years, retiring in 1995 after 39 years of service. He loved the quality time he spent with his grandchildren and very proud of his three children, his dedicated daughters and his son who spent much time with him during his illness assisting him in his daily needs. He joined the Shrewsbury Ave African Methodist Episcopal Zion Church, Red Bank, New Jersey and was member in good standing. He served faithfully where he was appointed and joyfully fulfilled the mission that was before him with God being his Helper. Roscoe served as an effective leader as Chairman of the Stewards Board Ministry, and for many years served as president of the Men of Zion Ministry. He sang in the Choir and wherever he could assist in fulfilling God’s purpose for His Church. Mr. Williams had a very humble spirit, never raised his voice in a negative manner, but always believed in planning his work, and working his plan. He will truly be missed by the church and community in which he lived.

Blessed are the dead which die in the Lord from henceforth: Yea, saith the Spirit, that they may rest from their labours; and their works do follow them. (Rev. 14:13) Roscoe Williams, 79, was born to the late Henry S. and Sophfronia White Williams,... View Obituary & Service Information

The family of Roscoe C. Williams created this Life Tributes page to make it easy to share your memories.

Blessed are the dead which die in the Lord from henceforth: Yea,...

Send flowers to the Williams family.