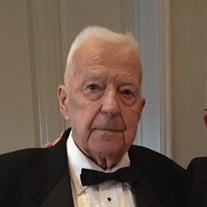 LTC Thomas F. (Mac) McNamara, passed away early Monday morning, December 9, 2019 at the age of 91. Tom was born on March 7, 1928 in Watertown, Massachusetts, the only son of Daniel Thomas and Catherine Fitzgerald McNamara. Tom grew up in Lexington, Massachusetts where he learned to recite the history of that town and there developed his abiding love of his country. Upon his graduation from Kemper Military School in Boonville, Missouri, Tom enlisted in the United States Army. His intelligence caught the attention of his commanders and he was selected to attend Officer Candidate Training School in Oklahoma, from which he graduated as a 2nd Lt in the Signal Corps. On November 19, 1951, Tom married his beloved Ann York. Following a brief wedding trip, Tom was deployed to Korea where he served as an army aviator and later served in the Vietnam War as a helicopter pilot. Tom was a proud member of the “Originals,” the corps of WWII veteran Army pilots who chose to remain in the Army as airmen after the Air Force was established in 1947. Over his twenty-year Army career, he and Ann were stationed both abroad, in Heidelberg, Germany, and in the United States, including Fort Huachuca, Arizona; Fort Rucker, Alabama; the Army National Guard in Colorado; and Fort Monmouth, New Jersey. Tom retired from the Army in October 1966 and settled in Tinton Falls with Ann and their five children. As a civilian, Tom served as a test pilot at Lakehurst and at Ft. Monmouth in the Communications and Electronics Research Center. He retired from his civilian career in 2011 when Fort Monmouth was closed. Tom’s years of military service instilled a wisdom that anyone who spent time with him would appreciate. His stories were rich and profound, always inviting more conversation and thought, no matter how often they were told or heard. He loved history, mathematics and learning; his early years as a photographer and amateur radio operator naturally evolved into his remarkable ease with computers and modern technology. He keenly followed politics and read the New York Times every day. He carried a copy of the United States Constitution in his coat pocket, next to his cellphone. Beloved husband of the late Ann York McNamara, Tom is survived by his five children; Mary M. Rigney (Peter) of Mooresville, NC; Sheila M. Gelsomine (Michael) of Howell, NJ; Michael T. (Kristine) of Los Gatos, CA; Jeremiah F. (Donna) of Manalapan, NJ and Eileen M. Heinzel (Paul) of Pennington, NJ. He is also survived by eleven beloved grandchildren; Elisabeth (Timothy) Campbell, Patrick Rigney, Sean Rigney, Caitlin Rigney, Casey McNamara, Erich Heinzel, Julia Heinzel, Jack Heinzel, Kristen Heinzel, Carly McNamara, Thomas McNamara and 2 great grandchildren, Beckett and Hudson Campbell. Tom leaves behind a great number of friends made over a lifetime of blessings, including special family friends Mary DiBenedetto and Bacelia Samuels, to whom the family wishes to express their deepest gratitude. Visitation will be held 3 to 6 p.m. on Sunday, December 15th at Bongarzone Funeral Home in Tinton Falls. Funeral Mass will be offered at 11 a.m. on Monday, December 16th at the Church of Saint Anselm in Tinton Falls. Interment will be held privately at Brigadier General William C. Doyle Veterans Memorial Cemetery in Wrightstown, NJ. In lieu of flowers, the family suggests that friends may make donations in Tom’s memory to the “U.S. Army Aviation Association of America (AAAA) Scholarship Foundation,” (Families of the Fallen) Inc., 593 Main Street, Monroe, CT 06468.

LTC Thomas F. (Mac) McNamara, passed away early Monday morning, December 9, 2019 at the age of 91. Tom was born on March 7, 1928 in Watertown, Massachusetts, the only son of Daniel Thomas and Catherine Fitzgerald McNamara. Tom grew up... View Obituary & Service Information

The family of LTC Thomas F. McNamara (Mac) created this Life Tributes page to make it easy to share your memories.